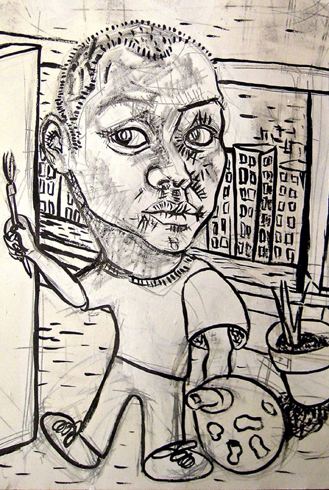 As a versatile artist, Alex Kukai Shinohara makes paintings, drawings, sculptures, and comics, among other things. He is interested in any medium (material, genre, or color), to express and communicate. "When I draw, I attempt to mark my drawings with precise and sharp lines. Embodying graphics is important for me to capture an unadulterated form in my drawing, both simplified and complex." Alex Kukai Shinohara said. "A voice and theme of my work is the culture of New York. I feel fortunate at times to experience and be affected by the particular entity and diverse interracial social groups of this city." He incorporates elements of street art, hip hop music, and underground culture into his practice using balloon letters at times to adorn canvases, drawings, and comic books, as well as Skateboard Paintings, to reveal an inspired sense of design imbued with edgy yet often buoyant feelings. His painting series "Kendo" (meaning "sword practice"), is painted thin, scratchy, and layered -in other words, graphic- using handmade oil paint, and particular pigments, to bring about an effect of subdued light in the physically taxing subject. Alex Kukai Shihara was born in New York, U.S.A., and currently works and lives in Brooklyn, New York. Received BFA from Rhode Island School of Design in 1996. Since then he has shown his works in Solo exhibitions and group exhibition both in Japan and US such as HPgrp Gallery, New York, Zoya Tommy Contemporary, Houston, Texas, Ise Culture Foundation, New York, Trace Gallery, Kyoto, Japan, Juichigatsu Gallery, Tokyo. Also as a versatile artist, Alex Kukai published his comics including "Twilight comic" and designed a CD Jacket.